Time to shut the door to the paclitaxel device controversy

It is time to shut the door to the paclitaxel device controversy: during TCT 2020, a large subgroup analysis of a randomized clinical trial (VOYAGER PAD) showed no mortality risk associated with the use of paclitaxel drug-coated devices (DCD) compared to not drug coated device in the treatment of peripheral artery disease (PAD). 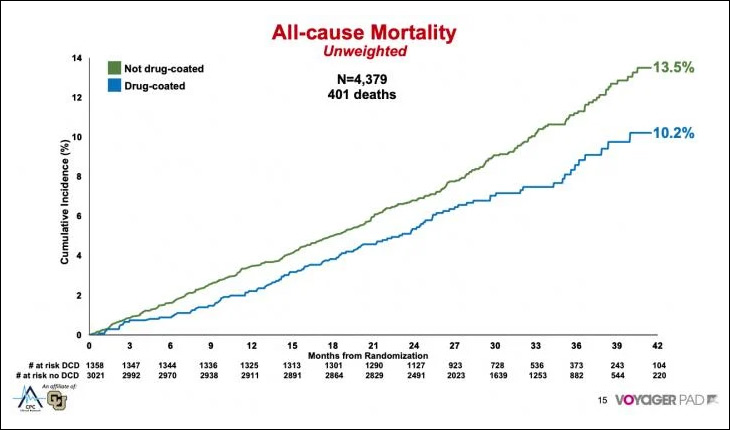 The subanalysis has been done on VOYAGER PAD RCT, a double-blind, placebo-controlled trial of PAD patients undergoing lower extremity revascularization randomized to Rivaroxaban 2.5 mg twice daily or placebo on a background of Aspirin 100 mg daily. Primary results of VOYAGER PAD have been presented at ACC and published on NEJM, while the subanalysis data referring to Paclitaxel DCB safety have been just communicated at TCT 2020 but not yet published.

Being highly relevant, this RCT subanalysis together with further recent publications is reinforcing the message of safety of Paclitaxel devices in treating Peripheral Artery Disease.

The message that Paclitaxel controversial benefit discussion is started to finish is coming from TCT Connect (14–18 October, virtual), the 32nd annual scientific symposium of the Cardiovascular Research Foundation (CRF), where different presentations showed benefit of Drug Coated Balloons with Paclitaxel, not affected by any safety issues compared to standard uncoated balloons.

LINK to the full Communication:

Despite the publication on Katsanos et al. meta-analysis has provoked consistent discussions on the increased risk of mortality at long term follow-up for patients treated with paclitaxel coated devices, several publications and experts opinions have criticized Katsanos' findings, showing no risks associated to the use of paclitaxel coated balloons to treat Peripheral Artery Disease. This recent subanalysis is confirming this conclusion and supporting again the safety of our LEGFLOW® device.
© 2020 Cardionovum GmbH. All rights reserved.