Settings & Participants:
A total of 161 hemodialysis patients with fistula dysfunction from 10 centers in China.
The sample size was calculated based on previous studies with clinically significant end points.

Patient Population Consecutive adult patients with fistula dysfunction who were candidates for PTA therapy (potential ≥50% venous stenosis measured by diagnostic ultrasonography) were further assessed according to the eligibility criteria. Once a patient was recruited as a participant, a baseline evaluation was obtained to record demographic characteristics, medical history, and drug treatment. 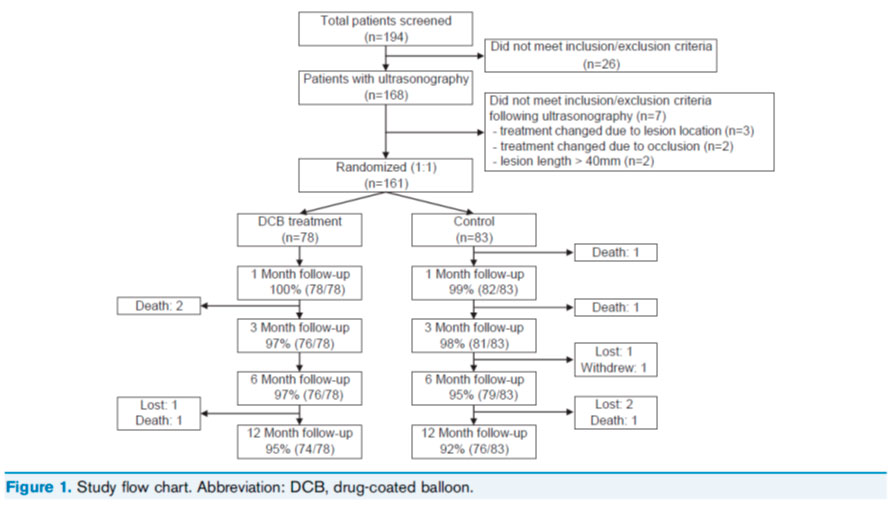 In the DCB group technically successful initial dilation at the target lesion was required and was followed by DCB treatment with a persistent dilated period of 120 to 180 seconds.

Statistical Analysis
The sample size was calculated based on the primary end point using an expected event rate of 70% and 45% in the DCB and control groups, respectively. 9,19 With the principle of efficient design and an assumed 25% rate of loss to follow up, 160 patients would be necessary for 80% power to detect superiority of DCB to conventional HPB angioplasty at an α level of 0.05. 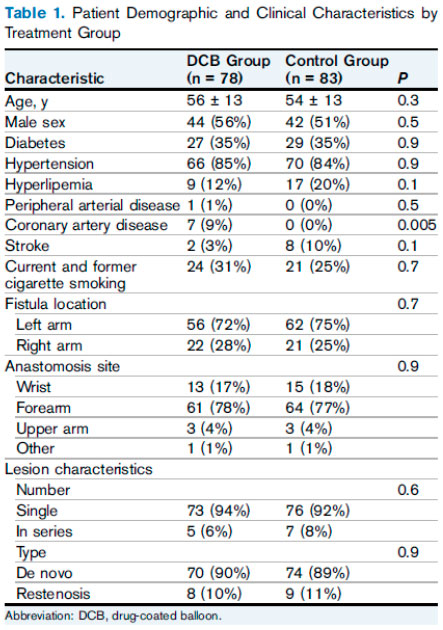 Study Participants and Procedural Characteristics
The study enrolled 161 participants, including 78 assigned to the DCB group and 83 assigned to the control group, at 10 centers in China from November 2016 to July 2017.

Figure 3: Follow up at 12 moths. DCB superior to HPB.
During DCB angioplasty, paclitaxel infiltrates the vessel walls in contact with the balloon, affecting local vascular endothelial cells with trace dosages leaked into the bloodstream. Similar safety profiles have been drawn from other studies in which paclitaxel-coated balloons were used for the same indication. The shellac-ammonium salt-based (SAFEPAX Technology) coating of the DCB is thought to reduce drug and excipient loss in the route from the sheath to the target lesion.